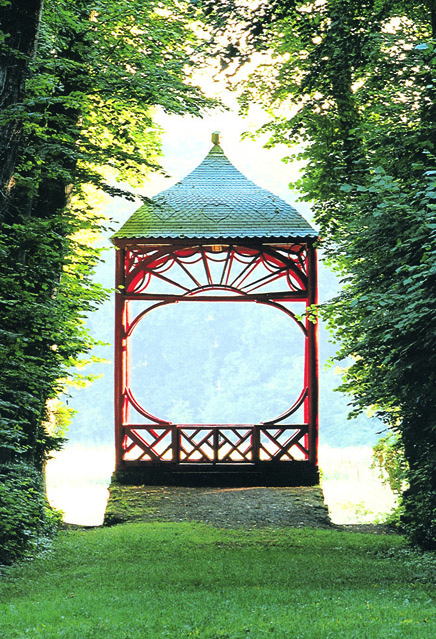 A remarkable feature of the park is the presence of "ornamental edifices", the small, fanciful monuments erected in verdant surroundings that were very much in vogue during that period. A good many of these rather fragile constructs have disappeared, making Canon one of the rare estates, fortunately, to have conserved all those in its grounds.

These ornaments, the so-called "fabriques", so-styled as they were "fashioned by the hand of man in nature", were tremendously popular, a success closely linked to the influence of philosophers and to the inspiration of numerous painters such as Hubert Robert and Watteau etc.

This craze for these whimsical constructions (like the Caramontelle ornaments in the Parc Monceau or Retz's Folies du Désert…) was also a product of a revolution in garden design, gardens becoming veritable "events in civilisation", and abandoning the purely picturesque and decorative to become the reflection of a whole period.

The garden thus became the mirror of new ideas arising from recent discoveries in History, Geography, the Sciences, Economics etc., free spaces open to flights of fancy, in which might bloom the utopias so dear to philosophers. It can now be walked around and perused like so many chapters of a vast three-dimensional encyclopaedia.

CANON is the perfect example of this late 18th Century style of landscaping.

The search for exoticism (the Chinese pavilion), mythological evocations (statues in Carrera marble representing characters from the Italian Commedia and mythology etc.), Antiquity (neo-classical ruins, Greek temple…) there are many such examples here, making it possible to imagine the atmosphere of Watteau's "fêtes galantes" or the writings of J.J. Rousseau…

This "spirit" of the second half of the 18th Century justifies the visitor's spending sufficient time walking around the grounds to indulge in an unhurried and leisurely stroll.